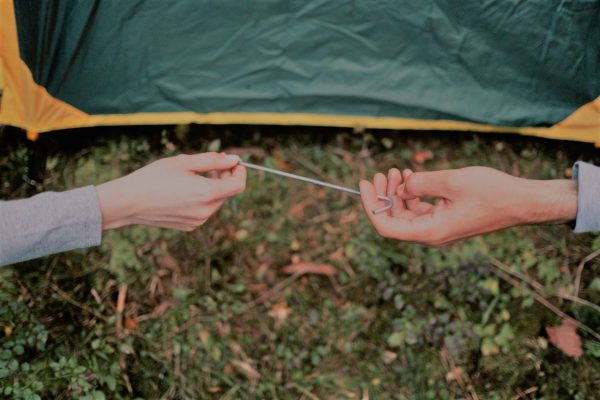 In the last article, we’ve talked about the camping terminology everyone should master. You’ve been introduced to your everyday camper’s (phrasal) dictionary. Still, do you know what tent pegs stand for? If you’re a beginner, there’s a good chance that you don’t.

Can you become a part of the outdoor-loving community without knowing by heart the essential camper’s inventory? Absofreakinlutely not! That’s exactly why we’ve chosen the whole tent-pegs-what’s-that subject matter as our today’s topic. Everything there’s to know about it you’ll find in the text below.

Tent pegs are steel spikes that keep your tent grounded and stiff. Usually, you’ll need one for each corner of your tent. How you’ll push the pegs into the ground depends on the type of soil. You can ever make DIY tent pegs using a branch. Since they’re mostly made from metal, you easily straighten them out using heat.

That can’t be the whole thing, of course! Let’s see what’s ahead!

What are tent pegs?

In simple terms: it’s the little spikes that keep your tent grounded. If you ever tried to set up camp, you’ve held them in your hands. Still, let’s consider something you’d call a standard definition. Tent pegs (sometimes called: tent stakes) are wooden, plastic, or composite-material spikes, usually with a hook or hole on the top end. They’re pushed or driven into the ground surface and are either directly attached to the tent’s material, or they’re connected to ropes attached to your camping shelter. Needless to say, they keep the tent safely positioned.

All in all: tent pegs are there to help maintain the tent’s shape, and to make it stable against the wind (an issue many campers have to deal with it in various manners). Also, there’s a little something called a tent peg mallet. It’s used when tent pegs are too big to be pushed into the ground by hand.

How many tent pegs do I need?

Usually, you’ll only need one peg per corner of your camping tent. In other words: if you’ve got 4 tent corners, you’ll need 4 tent pegs. However, you might want to think about carrying twice that number in case some of your pegs break due to high winds or other unfortunate events. Alternatively, you can always make DIY tent pegs. More about that you’ll find in the last paragraph.

What types of tent pegs are out there?

Let’s see what kind of tent stakes one might stumble upon shopping for camping equipment: 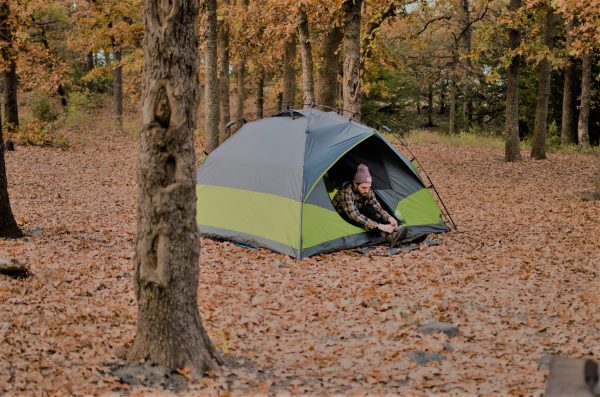 How to put tent pegs in the ground?

Now that we’ve covered the different types of tent pegs, it’s time we see how they work. In other words: how do you put tent pegs in the ground. We’ll show you to do it in accordance with the type of soil you’ll have to deal with when camping.

One might think: geesh, it can’t be that hard to push a tent stake into sand or the softer types of soil. And, of course, it is pretty easy to push a tent peg into the sand. However, keep in mind that this type of sole’s got the least amount of holding power. It’s really not that good when you’re in need of extra holding power.

One great strategy for this is to dig into the sand using your hands until you’ve reached a sticky layer that’s a bit denser. Pushing your pegs into this layer will help keep them in place. Once they’re pushed into the soil, compress the dirt around the pegs for extra holding power. Also, if you’re car-camping (and can carry a bit of weight), it’s best you use the heavier screw-in pegs as they’re known to hold out the best in sandy soil.

As a good alternative to screw-in pegs, it’s alright you use v-blade or tri-blade stakes. If you’re helplessly stuck with thin stakes, you might want to think about adding a flat rock on the top of the buried peg once, of course, you’ve tied the guy line onto it.

It’s the best and easiest type of surface for putting in tent stakes. You can simply use your hand or foot to push them into the ground. However, if the ground’s a bit hard, but lacks rocks, just give them a gentle push using a rubber mallet or a piece of wood. You’ll do this without investing much effort, trust us. Also, you’ll want to avoid using the stones to pound on the pegs, as they can easily damage the stakes.

Lastly, you’ll want to angle the peg at 90° to the cord in order to maximize holding power.

Let’s say you’ve decided to set up camp on the ground with many rocks in it. In that situation, you’ll want to use the thinner shepherd’s hook or nail-type pegs, as they’re able to fit between the stones. Twist your shepherd’s hook back and forth in order to find gaps between the rocks.

Now, one might think that, due to the stones in the ground, you’re out of most options when putting in your stakes at an angle. However, this shouldn’t really concern you a lot, as the rocks are pretty good at holding the stakes.

During wintertime, the way you’ll anchor your tent using tent pegs will, of course, depend on the depth of the snow you’ll witness.

If you do reach the bare ground, you’ll want to use a nail-type stake, as the frozen ground is too tough for any other peg you’ll think about using. Also, you’ll want to use a mallet, or maybe the back of an axe, or a heavy piece of wood to push the pegs deep enough (you’ll need to reach a certain depth to ensure they’re firmly placed in the ground). Never use your hand or foot for this type of ordeal. It’s not going to work, and you might hurt yourself.

If you haven’t got an alternative to setting up camp directly on the snow, you’ll have to use snow stakes. You might’ve assumed this, but the holding power of snow is even worse than sand. Also, you’ll want to place them at an already famous 90° angle to the direction they’re being pulled on. Once they’re firmly placed, tuck on the snow around the peg to enhance holding power.

How to make your own tent pegs?

Imagine your camping party somehow lost the tent pegs along the way. Instead of panicking (which is clearly a no-no), you’ll want to go DIY. So, what’s there to be done?

You’ll have to scan the area for downed branches. Make sure they’re not rotten and brittle. Once you find a strong enough piece that’s about a foot long (an inch in diameter), carve one end of the branch into a point. On the other end of the stick, you’ll want to create something of a notch. You’ll do this by making a cut across the branch that’s at least one-third into the wood. Below the incision, you’ll carve up into the cut to make a cutout in the shape of a wedge. That’s where you’ll tie the tent’s guyline around the notch.

Also, keep in mind these DIY tent pegs work best went they’re pushed straight into the soil instead of at an angle.

How to straighten tent pegs?

First things first, you’ll have to cover the steel peg with regular soap (it shouldn’t have any additives like fragrances, skin conditioners, etc.). Next, you’ll want to heat up the peg using a blowlamp and a pair of pliers (so you don’t end up getting burned). Do this until the soap turns black and try to spread the heat evenly over the area. Carefully watch for the moment when the soap turns black as that will be a clear signal you’ll unintentionally melt the peg if you continue. Once you’re done straightening the peg, quickly douse it into a vessel filled with water.

That’s about it, dear folks! We hope you’ve had a fun ride reading this one! For more camping-related tips, make sure to visit this page.

← Prev: Camping Terminology Everyone Should Master Next: How Should Hiking Sandals Fit? →