How to Remove Scales From Swiss Army Knife? 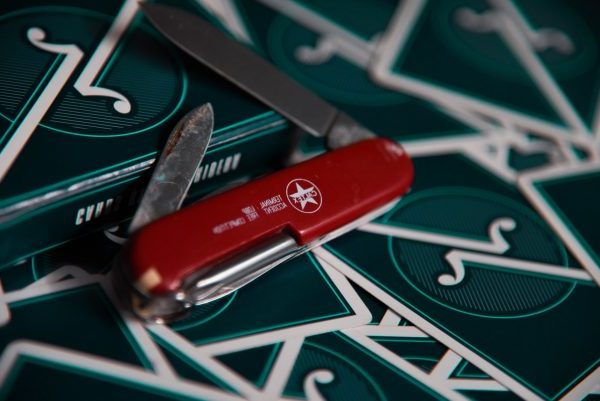 Do you know how to pronounce Offiziersmesser? Neither did American soldiers during WW2. Instead, they gave this multifunctional tool its more popular name – the Swiss Army knife.

The Swiss Army is one of the most distinguishable items you’ll find anywhere in the world. Rare are those who haven’t seen its trademark design. Also, the Swiss Army knife is a sine qua non of outdoor lovers’ equipment worldwide (just like a good camping axe, which you can find here). Nowadays, folks might wonder if there’s a way to customize its world-famous looks. Or, they might be curious about whether or not they can give the Swiss Army knife a deep clean by removing the scales and re-attaching them later.

Since you’re reading this, there’s a chance you’ve recognized yourself in the last two sentences. Wondering how to remove scales from Swiss Army knife? Read the text below!

Removing the scales from your Swiss Army knife is probably one of the easiest equipment maintenance tasks you’ll ever stumble upon. Firstly, remove the tweezers&toothpick combo from your knife. The empty slots will serve as nooks. Secondly, find a small screwdriver and make it go through the nook. Afterward, just gently lift the scale upwards. That’s it.

Before we dismantle the famous pocket knife into parts, let’s take a look at how they came together.

A quick history of a pocket knife

Although some people might think that the Swiss Army knife was the first multifunctional pocket knife out there, that’s not exactly the truth. Herman Melville, the author of Moby Dick, in his most famous work mentions a knife that looks a lot like the one we’re talking about here. However, the Swiss Army doesn’t appear anywhere between the covers of the aforementioned book.

Moving on to the late 1880s, Switzerland. The Swiss Army wanted to purchase a multi-use pocket knife for its soldiers. They wanted them to easily open canned food or maintain their M1889 Swiss service rifles (most importantly: dismantle them using a screwdriver). The initial production of 15.000 pocket knives was carried out by a German manufacturer.

In the 1890s Switzerland took over the production of pocket knives for its army and added several tools to the design. Most importantly – the corkscrew. Of course, we’re joking a bit and we don’t want to assume the popularity of the innovation among the Swiss soldiers. Anyway, there were two companies that produced these knives: Victorinox and Wenger, as they were later called. They merged in 2005 when Victorinox acquired Wenger. Both companies used the famed cross&shield emblem, which is still in use today.

In 1921, Karl Elsner’s company (Victorinox) introduced stainless steel to the production of the Swiss Army knife. Prior to that, it was called Victoria, in memory of Elsner’s mother. Stainless steel’s alternative name is inox (short for the French acier inoxydable). Those two words combined make up a name (Victorinox) that is still in use today, and by which folks all around the world recognize the original Swiss Army pocket knife.

The story of how the Swiss Army knife got its name

Let’s expand on the story mentioned at the beginning of this article.

As a tool primarily used by soldiers, it found its way to the American army fighting in Europe during WW2. Soldiers had a bit of trouble, to say the least, pronouncing Offiziersmesser (Officer’s knife) or Sackmesser. So, they worked with what they had and eventually came up with a name that is still used all around the globe: the Swiss Army knife.

We’ll finish this history lesson with an interesting fact. The aforementioned Victorinox was founded because the Swiss didn’t want their soldiers sporting German-made pocket knives. Ironically, the same company is now supplying the German army with the product.

What does it consist of?

In other words: which tools might one find in a Swiss Army knife available today? Well, there are over 100 versions of the product so the question’s a bit tricky. Nevertheless, we’ll try to count most of them right here.

The classic version of the Swiss Army knife has:

Other versions might have some or all of the following:

Now, that, of course, isn’t the whole list. It would take a decent amount of time to count them all down. Let’s give you an example: Wenger Giant, currently the largest Swiss Army knife available on the market, contains 87 implements and 141 functions and it weighs about 7 pounds (3 kgs). Guess we can’t say it fits the definition of a pocket knife, right?

The Swiss Army knife in our contemporary world

So, what’s the current situation with the production of the most-recognized knife? As we’ve already mentioned above, you can find the Swiss Army knife in about 100 or more versions. Each day 34k of these pocket knives are produced and exported to more than 100 countries around the globe. Swiss Army knives are a camping equipment necessity, just like sleeping bags (and here you’ll find some tips on the subject of sleeping bags).

These knives serve as informal ambassadors of the Swiss nation. Besides the well-known high-quality Swiss chocolate delicacies, of course. How could we forget to mention that? 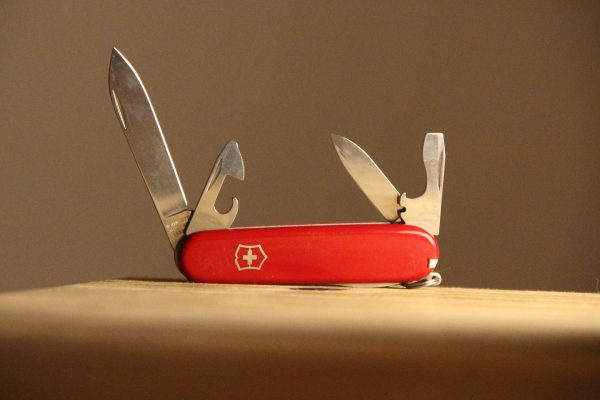 Is there a way to remove scales from the Swiss Army knife?

There could be many reasons why someone would want to remove the scales from their Swiss Army knife. Although, not too many.

We can imagine a Swiss Army knife owner getting tired of the famous, yet monotonous, red scales with the white cross&shield insignia design. Some regard it as tradition, some think it’s dull and conservative not to experiment with different styles. Anyway, the removal of the scales can be an aesthetically-backed decision.

Or, suppose someone wants to deep clean their Swiss Army knife. Whatever’s the case, you’re in for a treat.

Let’s get down to business. To give a simple answer to the question proposed by the title of this paragraph: of course, there is a way. In the text below, we’ll show you everything you need to know about removing scales from your Swiss Army knife.

Contrary to popular opinion, scales are not glued to the body of the Swiss Army knife. That being said, you can remove them without much hassle. The whole process is so easy, as you’re about to see. It’s easier than removing waterproofing from a tent, which is a pretty light task itself.

Step #2: Find yourself a decent tool and get to work

The next thing you’ll want to do is to find an item that will be small enough to go through the nook. That will enable you to pull off the scale.

You can use a number six screwdriver to handle the task. Make it go through the nook. It’s sturdy enough to help you gently lift the scale upwards. Be patient as you don’t want to break the scale in two (even though that’s probably not going to happen).

The scale is attached to the body by three separate holes, as you’ll easily notice when you remove it from the body of the knife.

Of course, the last step is to re-attach the scales, whether they’re old or new. As we’ve said, you’ll those little holes on the inside of the scale. On the body of the knife, you’ll notice little bumps that fit the aforementioned holes.

To prepare for this it might be good to keep the scales in mildly hot water just the plastic will fit better. Also, some folks suggest using a dryer. We haven’t tried that, but you can give it a shot.

Of course, be very gentle when putting the scales back on.

That’s about everything you’ll need to do in order to remove and re-attach the scales. Easy as that!

An extra tip on the side: How to properly clean your Swiss Army knife?

Okay, so we’ve got a bit of time left. Why not use it to show you something practical? Let’s take a look at how you can clean your Swiss Army knife.

We recommend you open up all the tools minus the knives (you’ll do them at the end). Find an old toothbrush somewhere in your home, or buy a cheap one in your local store. Use it to scrub the interior of your knife and all the tools. A good old soap&water combo will do the trick.

Just make sure that you dry your knife after you’re done cleaning it, as you don’t want rust to appear.

So, that’s about it on the subject of removing scales from the Swiss Army knife. As you could’ve seen, it’s one of the easiest tasks out there. You’ll have no trouble dealing with this issue! For more camping equipment tips, visit this page.

← Prev: Is It OK to Leave Water in a CamelBak? Next: Why Does Hiking Suppress Your Appetite? →

There are many ways how you can explore the magnificent island of Puerto Rico. Sure, you can book a 5-star hotel trip, but where's the outdoorsy adventure in that? If you are an outdoorsy type of traveler on a budget, may we suggest backpacking Puerto Rico instead?...